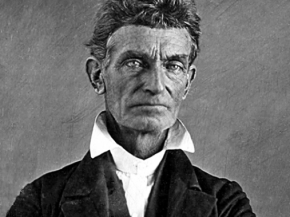 John Brown, radical antislave, abolitionist who believed armed insurrection was the only way to overthrow the institution of slavery in the United States.
Traumatized from his childhood to have attended violence imposed on a slave, he dedicated his life to the abolitionist cause after the murder, in 1837, of a friend who shared his ideas.
In 1847, having met Frederick Douglass, Brown got closer to the Afro-American community and lived in a farm of the State of New York.
From 1855, Brown, helped by his 5 sons, opted for violent action and settled in Kansas, then embryonic State (created in 1854) where there were a lot of  French slavers refugees of Santo Domingo.
The partisans and the opponents of the slavery had come to the armed struggle (the law there being vague on the question).
The slavers , the Border Ruffians coming from Missouri raised an armed militia.
Brown and his sons fought them.
In May 1856, in Pottawatomie Creek, Brown and his supporters killed five pro-slavery supporters in the Pottawatomie massacre in response to the sacking of Lawrence sacking of Lawrence by pro-slavery forces.
The same year, during the battle of Osawatomie, Brown defends a village against 400 assaillants.
On October 16th, 1859, Brown tries to raise the slaves of Virginia and takes control of the federal arsenal of Harps Ferry (West Virginia) to supply them weapons.
But it is a failure because no slave moves. Encircled by Marines and hurt, Brown is taken, sentenced to death and hung on December 2nd, 1859 in Charles Town (Virginia).
The execution of John Brown had a big echo and contributed to reunite the world opinion in the abolitionist movement.
Although Lincoln made nothing to prevent the execution of Brown which he considered as a terrorist and a visionary, the famous song John Brown Body became the hymn of the nordist armies during the American Civil War.