Brazil’s oldest and most important historical and scientific museum has been consumed by fire, and much of its archive of 20 million items is believed to have been destroyed.
The fire at Rio de Janeiro’s 200-year-old National Museum began after it closed to the public on Sunday and raged into the night. There were no reports of injuries, but the loss to Brazilian science, history and culture was incalculable, two of its vice-directors said.
“It was the biggest natural history museum in Latin America. We have invaluable collections. Collections that are over 100 years old,” Cristiana Serejo, one of the museum’s vice-directors, told the G1 news site.
Marina Silva, a former environment minister and candidate in October’s presidential elections said the fire was like “a lobotomy of the Brazilian memory”.
Luiz Duarte, another vice-director, told TV Globo: “It is an unbearable catastrophe. It is 200 years of this country’s heritage. It is 200 years of memory. It is 200 years of science. It is 200 years of culture, of education.” TV Globo also reported that some firefighters did not have enough water to battle the blaze.
It wasn’t immediately clear how the fire began. The museum was part of Rio’s Federal University but had fallen into disrepair in recent years. Its impressive collections included items brought to Brazil by Dom Pedro I – the Portuguese prince regent who declared the then-colony’s independence from Portugal – Egyptian and Greco-Roman artefacts, “Luzia”, a 12,000 year-old skeleton and the oldest in the Americas, fossils, dinosaurs, and a meteorite found in 1784. Some of the archive was stored in another building but much of the collection is believed to have been destroyed. 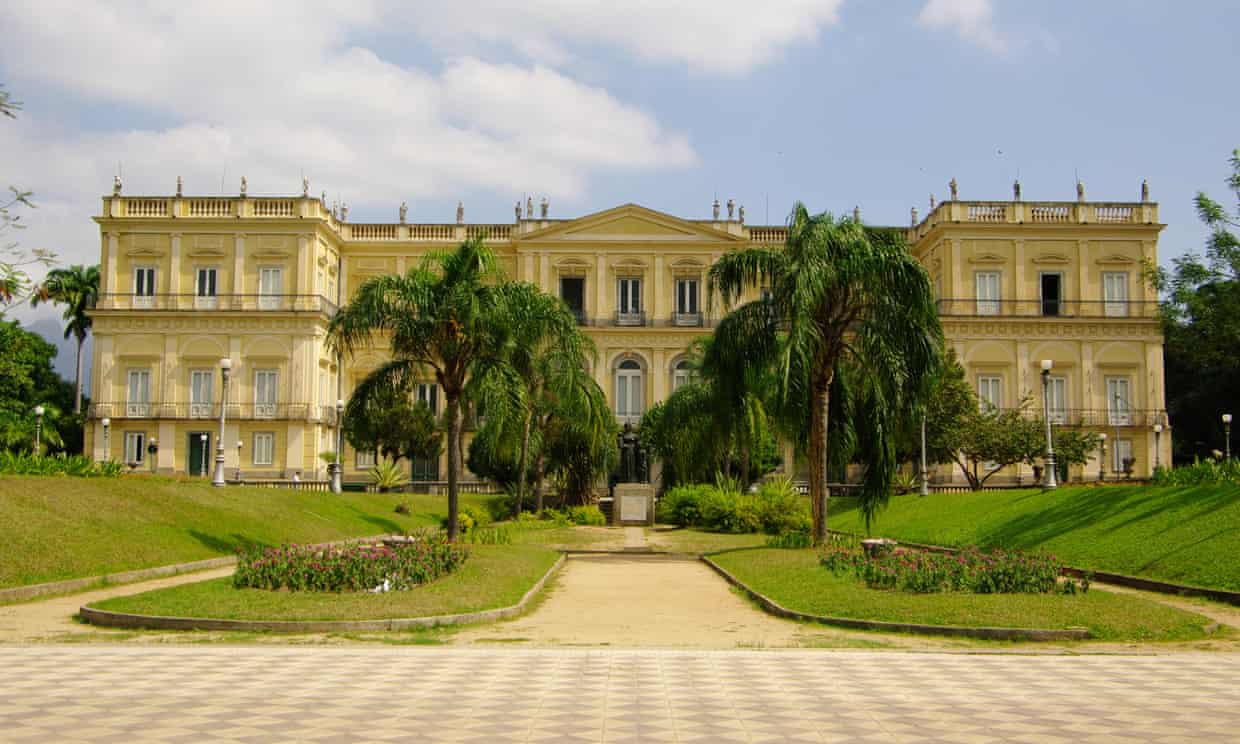 Mércio Gomes, an anthropologist and former president of Brazil’s indigenous agency, Fundação Nacional do Índio (FUNAI), compared the loss to the burning of the library of Alexandria in 48BC. “We Brazilians only have 500 years of history. Our National Museum was 200 years old, but that’s what we had, and what is lost forever,” he wrote on Facebook. “We have to reconstruct our National Museum.”
Duarte said that governments were to blame for failing to support the museum and letting it fall into disrepair. At its 200th birthday in June, not one state minister appeared. “For many years we fought with different governments to get adequate resources to preserve what is now completely destroyed,” he said. “My feeling is of total dismay and immense anger.”

Duarte also said that the museum had just closed a deal with the Brazilian government’s development bank, BNDES, for funds that included a fire prevention project. “This is the most terrible irony,” he said. 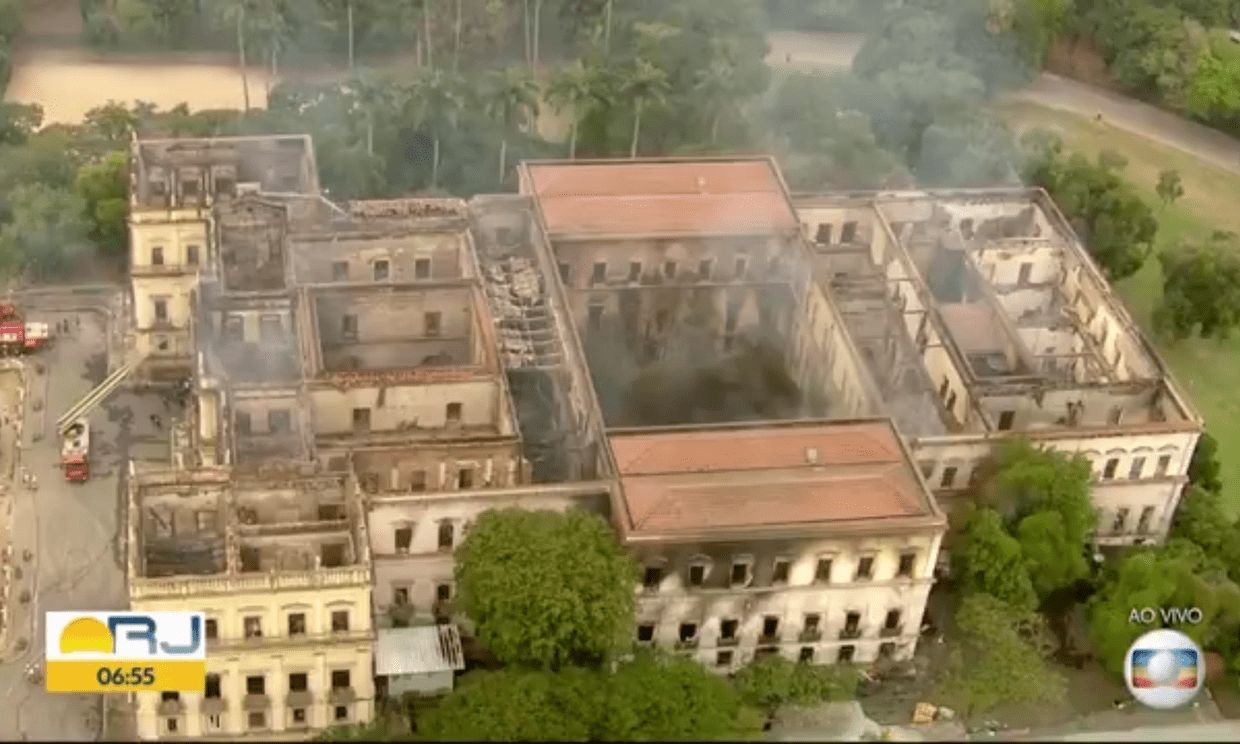 At the scene, several indigenous people gathered and criticised the fact that the museum containing their most precious artefacts has burned down seemingly because there was no money for maintenance of hydrants, yet the city had recently managed to find a huge budget to build a brand new museum of tomorrow. A crowd of several dozen people outside the gates, several of whom were clearly distraught. Others blamed the government’s austerity policies and corruption.
Rio’s fire chief Colonel Roberto Robaday said the firefighters did not have enough water at first because two hydrants were dry. “The two nearest hydrants had no supplies,” he said. Water trucks were brought in and water used from a nearby lake. “This is an old building,” he said, “with a lot of flammable material, lots of wood and the documents and the archive itself.” 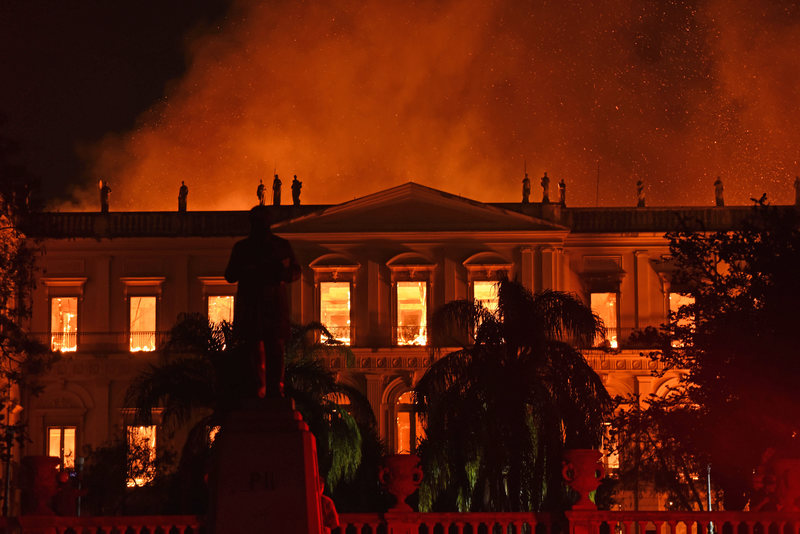 Some Brazilians saw the fire as a metaphor for their country’s traumas as it battles terrifying levels of violent crime and the effects of a recession that has left more than 12 million people unemployed.
“The tragedy this Sunday is a sort of national suicide. A crime against our past and future generations,” Bernard Mello Franco, one of Brazil’s best-known columnists, wrote on the O Globo newspaper site.